Until 2011, RepliCel Life Sciences (TSX: V.RP, Stock Forum) was engaged in the business of hair regeneration, developing treatment solutions for those suffering from pattern baldness. Compared to other entities within the space, RepliCel was pursuing a minimally invasive treatment with potentially permanent results. This innovative process involved growing cells extracted from the patient’s healthy hair follicles to stimulate growth in areas experiencing hair loss due to androgenic alopecia.

The hair loss treatment space, like the progressive condition at its base, is monumentally huge. With 40% of American males experiencing pattern baldness by the age of 30, it is of little surprise that the hair loss treatment market, according to a 2013 study conducted by the International Society of Hair Restoration, rakes in $3.0 billion annually.

RepliCel was unique in its offering as other treatments for hair loss such as hair transplants, covers like weaves and toupees, and medicated topical creams like Rogaine were respectively limited, noticeable and temporary. Stem cells have also been touted as a remedy for hair loss, but the research is far from complete and this division of scientific study is heavily regulated, creating a bottleneck between tech development and the shelf.

The ability to safely extract healthy cells from the dermal sheath cup of the hair follicle and grow those same cells in a lab environment, gave RepliCel a virtually limitless method to regenerate someone’s head of hair using their own cells with a science that would take years instead of decades to bring to commercialization.

Soon after David Hall joined the company as CEO, they embarked on an expansion of applications of this amazing family of cells. By utilizing a different cell population from the hair follicle – the non-bulbar dermal sheath fibroblast cell group – the company also found opportunity treat other conditions such as tendinosis, a chronic degeneration of the tendon due to aging and injuries, by the injection of these active fibroblasts.

Another condition treatable by the aforementioned cell group is skin damage caused by aging, UV exposure and lifestyle choices which results in wrinkles and sagging as the dermal layer loses its elasticity. Injection of the active collagen-expressing fibroblasts is designed to reverse this degenerative process.

This addition in corporate direction enhanced the company’s potential long-term profitability but also diversified its attentions and capacity. While the company dealt with growth media issues it had to resolve on the manufacturing of the pattern baldness product, Replicel’s market momentum began to tread water as investors lost interest in what was otherwise a promising venture. The company has worked hard to bring this multi-pronged beast under control and in the last 18 months has enacted initiatives which have brought schedules back online, powering a cycle of trials that will see major advances in commercialization of all three of its proposed treatments. 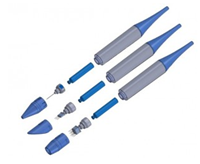 On top of the bio-med side, the company has also developed a patent-pending state-of-the-art delivery system for the above treatments which in and of itself bears tremendous potential for another lucrative avenue of revenue generation. This dermal injector allows for programmable depth and dose with built-in freezing replacing the need for anaesthetic. Its leading-edge design is expected to disrupt the dermal filler market which in 2013, according to the American Society of Plastic Surgeons, consisted of almost 6.0 million injected procedures and over $3.0 billion in revenue. Good news considering that RepliCel expects the approval for this device in 2016.

For those interested, below is a graphed timeline of testing and development for the company’s current pipeline: 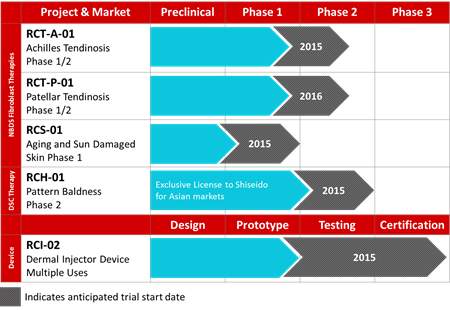 That’s a healthy plate of activity and one might surmise RepliCel could topple under the weight of its multi-faceted offerings, but management has been keen to design a corporate philosophy that focuses on value creation and IP rather than the mechanics of mass manufacture and commercial product launches. This will allow the company to license out its technology to multiple partners for a global reach not easily attained by vertically modeled bio-tech firms and to continue its R&D efforts enhancing current offerings as well as developing new marketable technologies.

Partnerships are another strong point for RepliCel as the company has teamed with 140 yr-old cosmetic giant Shiseido Company based in Tokyo. Shiseido, the third largest cosmetics company on the planet, has signed an agreement with RepliCel, giving Shiseido exclusive geographic licensing for RCH-01 (treatment of pattern baldness) in certain Asian countries such as Japan, China and South Korea. As a result of the agreement, both companies will share their respective improvements to the technology while individually carrying out of human clinical trials. Due to the recently enabled legislation in Japan which offers potential early access to the market, RepliCel has embarked on a focused Japanese licensing program for its fibroblast based treatments for tendinosis and ageing and UV damaged skin.

The company has also partnered with the University of British Columbia, Department of Dermatology and Skin Science to conduct research on the biomechanical and functional characteristics of hair follicles. This association with reputable academia provides a boatload of credence for RepliCel’s innovative tech and gives hope for future potentially commercial discoveries.

Meanwhile, as the trial results continue to come in, RepliCel is building a solid foundation for taking the company to the next level and its family of investors may see the lucrative fruition of its efforts as early as 2016. As of yet, the company’s story is relatively unknown, but as it continues to progress through these trials and development phases, it is becoming increasingly apparent that it is wildly undervalued. The challenge will be if management can continue to keep control of its corporate ship, meet those necessary milestones and initiate growth to capture a long-term slice of an already lucrative sector. In the end, 2015 will be the proving ground for RepliCel’s long-term success. I will be watching them closely over the next 12 months.