Stem Cell Technology Used in Search for the Holy Grail of Hair Treatments: a Cure for Baldness 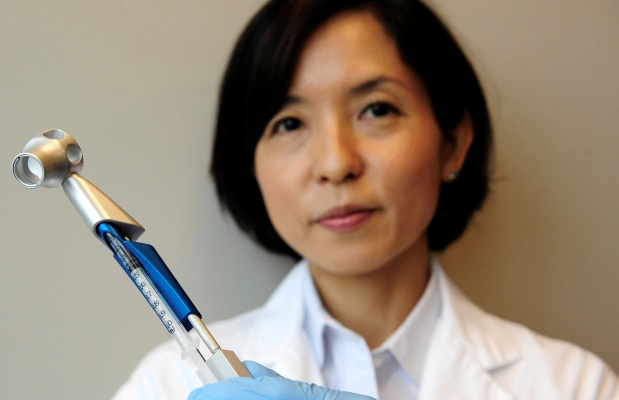 Hisae Nakamura, director of research and development for RepliCel, with a device used to inject cells into the scalp to stimulate hair growth. The company’s process replicates cells from hair follicles on the back of the scalp, which are typically resistant to the hormone that causes baldness, and injects them into bald areas.

A cure for baldness doesn’t leap to mind when one ponders the next advance in stem cell research, but whoever manages to do it stands to become very rich.

Scientists around the world have already grown liver and brain cells in the laboratory using cell samples from humans. Others — including some working for a Vancouver-based company — are hard at work trying to find a way to nurture new hair growth on shiny heads.

“It’s a market where people spend a ton of money,” says David Hall, CEO of RepliCel Life Sciences Inc., a biotech firm with offices in downtown Vancouver that has attracted the attention of Japan’s Shisheido Co. The cosmetic giant paid $4.2 million in July to share RepliCel’s research on a highly speculative technology for treating hair loss.

Hall, who says his own flowing locks have no high-tech enhancement, acknowledges that plenty of people think hair cloning research is frivolous. But those usually aren’t people who are losing their hair, particularly at a young age.

“It’s just not perceived as a medical need, but I think there are a lot of people who would say it’s important to them,” Hall says. “There’s definitely a mental health aspect for young men and for women in their 30s and 40s. It can be very devastating to their self-esteem.”

Hair transplants are still the “gold standard” for hair restoration, he says, but their success relies on the skill of the surgeon and a supply of healthy follicles from elsewhere on the scalp. The RepliCel technique was pioneered by company co-founders Dr. Rolf Hoffmann, a German dermatologist, and Vancouver researcher Kevin McElwee. Hair follicles are harvested from the back of a person’s scalp, where hair is typically resistant to the hormone that causes baldness. That tissue is transferred to the lab, where researchers isolate dermal sheath cup cells from the base of the follicle. Those cells are replicated by the millions over a period of three months, later to be injected into bald areas at the top of the scalp using a specially designed device.

“What initially attracted me to this concept is it’s not a drug,” says Hall. “The treatment uses the patient’s own cells to replace hormone-compromised hair follicle cells in the bald areas. The concept of treating cellular deficits with your own cells is elegant. It’s the same concept we’re using in our other treatment in development for chronic tendinosis.”

The company hopes to have a clinical trial with 120 men test the procedure in Germany in coming months as it works its way through regulatory requirements that could ultimately lead to licensing in Europe, the U.S. and Japan. It has already completed an initial trial of 19 subjects that found no serious adverse reactions six months after injections.

But RepliCel’s game plan isn’t to bring its cell cloning all the way to market, Hall says. Rather it wants to prove the effectiveness of the technology in the hopes it will be purchased by a much larger company.

(Hall was formerly the chief financial officer of Angiotech Pharmaceuticals Inc., a Vancouver biotech darling that rode high during a boom early last decade after it developed a drug-coated cardiac stent. U.S. medtech firm Boston Scientific became a partner on that technology and still sells the stents, but Angiotech faltered in the 2008 financial crisis and filed for bankruptcy protection in 2011.)

Until recently, RepliCel’s main direct competitor in this area was a biotech start-up called Aderans Research Institute based in Atlanta, Ga. It ran clinical trials on a process described as “hair multiplication or hair cloning,” although it targeted different cell from the hair follicle than RepliCel. The work was initially bankrolled by Japan-based Aderans, a multinational company that started as a wig-maker in the ’60s, eventually buying Bosley, a chain of hair transplant clinics. In 2012, Aderans bought Hair Club, formerly known as Hair Club for Men, the U.S. company that spawned a generation of testimonial-style late-night TV commercials.

Vern Liebmann, CEO of Aderans Research Institute, said in a recent telephone interview that his company is now “in hibernation” since Aderans pulled its funding. “It’s perceived as high-risk and in the current climate — going back to 2007-2008 — funds for pioneering-type efforts are hard to come by.”

Liebmann said investors are interested in hair treatments because of the immense market they could potentially tap, but bringing a biological treatment to fruition means following the same strict regulatory process required by pharmaceutical companies before a drug can be sold. That takes deep pockets.

“If RepliCel didn’t have Shisheido, they’d be in a world of hurt,” he said. “They got lucky. We didn’t.”

The companies are all chasing the estimated $3-billion per year spent on hair restoration treatments around the world. The market could be even larger if women — who are turning to hair replacement surgery in greater numbers — also buy into newer procedures.

“For women, when you’re starting to lose your hair — no matter what age you are — it really packs an emotional wallop. You can feel less attractive, you can feel less sexy. It turns out a lot of our identity is tied up in our hair, ” she said in a telephone interview. “It’s how we present ourselves to the outside world.”

Androgenetic alopecia is the medical name for male pattern baldness (thinning hair and eventual baldness starting at the temples, moving to the crown and top of the head) and female-pattern baldness (general thinning.) They’re both caused by a combination of genetic predisposition and hormonal changes that are not particularly well understood in women. In men, testosterone is converted to dihydrotestosterone (DHT), which causes follicles to slow and eventually stop producing hair.

Once it starts, says Janus, both women and men are launched on a conflicted emotional journey.

“There’s a real dichotomy. You feel bad because you’re losing your hair, losing who you were. Then you feel guilty for feeling bad because it’s only hair. So the psychological hit isn’t just once, it’s twice. Society tells you you shouldn’t care, but you know you look weird.”

Another reason for a jaundiced view of the search for a cure to baldness — the holy grail of hair treatments — is that it’s been dominated by snake-oil salesmen for decades. These schemes have played on the emotions of men and women worried about losing their sex appeal or even their edge in the business and professional world.

But Janus says anyone who can make an effective product will find a world of grateful buyers.

“Are they playing on insecurities and are they making money?” asks Janus. “If they’re selling stuff that really doesn’t work, then I think they’re taking advantage. If they actually have a product that works very well, like Rogaine or implants or wigs … If they’re selling something that is going to give a person — male or female — that sense of self back, then they provide a service. And it’s a good thing.”

Dr. Jeff Donovan, a Toronto dermatologist who specializes in hair transplants, agrees the hair-restoration industry has a dismal reputation because it’s short on hard research and long on hard sells.

“It makes it a lot more difficult for people doing good work to get their data seen … How do you get the public to understand that this is really backed by science — which is what is so desperately needed — versus someone who just brings a product to market and licenses it under nutritional supplements, let’s say, and with strong marketing the public can be convinced that both of those are equally promising.”

Donovan advises consumers to wait for evidence from objective clinical trials before buying into anything.

And like the U.S. Food and Drug Administration-approved treatments already on the market — such as minoxidil cream and finasteride pills — anything new will probably work to some extent on some people, he predicts. Donovan has heard RepliCel’s Hoffman present early findings at a European dermatology conference and says he’s intrigued by the possibility that it could one day be added to the mix.

“These treatments don’t work in everyone and don’t work in advanced hair loss. Minoxidil works differently than Propecia (finasteride), one’s a topical treatment and one’s a pill, and the two combined work even better. So here we have a third treatment (RepliCel’s) that works even differently. It’s going to be exciting to see if it does anything and, if it does, even a little bit, then it can be combined with minoxidil as a treatment. Because anything you can do to help hair is going to be good.”

Not just for Nobel Prizes anymore A team from the Tokyo University of Science made headlines in 2012 by implanting laboratory-made human hair follicle germs on the necks and heads of bald mice which later grew tiny mohawks of straight black hair.

That work builds on the groundbreaking discoveries of 2012 Nobel Prize co-winner Shinya Yamanaka of Kyoto University, who found a way to turn mature cells from mice into immature stem cells that can then be programmed to grow into any type of cell in the body. Until then researchers had concentrated on embryonic stem cells — harvested from animal and human embryos a few days after fertilization — which are known as undifferentiated cells, capable of multiplying into all of the body’s specialized tissues.

Now labs can create induced pluripotent stem cells, meaning they are capable of becoming any type of cell, from mature human cells. That’s the basis upon which other scientists have grown liver tissue and more recently brain tissue in a laboratory setting.