To read the entire article as it appears on Seeking Alpha click here.

RepliCel Life Sciences, Inc. (OTCQB:REPCF) is a company focused on the development of autologous cell therapies currently targeting pattern baldness, tendonosis and aging skin. The technology is based upon two different cell types derived from the hair follicle. One product is comprised of dermal sheath cup cells which are believed to be responsible for generation of hair follicles. The other product is a platform technology comprised of fibroblast cells responsible for the synthesis of Type I collagen. In both instances the cells are derived from a small (single-suture) biopsy taken from the back of a patient’s head.

Hair-derived fibroblast cells such as those under development by RepliCel, have been shown to produce five times more Type I collagen than fibroblast cells derived from skin. RepliCel’s products are administered to the target site in need of repair using a proprietary purpose-designed injector, also under development by RepliCel. This has been optimized for the administration of cell suspensions and other cellular injections.

According to the company, its cell-based products enjoy several beneficial attributes due to their autologous use:

The goal of RepliCel is to generate compelling Phase I and II data for potential licensing or sale to larger life science companies with experience, expertise, and capacity for commercializing product to market. The intent is to de-risk technologies for late-stage partners which delivers nearer-term return on investment to shareholders than would exist for those investing in a company aiming to take a product through commercial approval and distribution.

In July 2013, RepliCel announced it had completed a collaboration and Technology Development agreement with Shiseido Company Limited, the world’s fourth largest cosmetics firm. This gave Shiseido exclusive market rights for the hair regenerative technology, RCH-01, in the ASEAN countries including, Japan, China, Taiwan and South Korea. The deal included a $4M upfront payment and sales milestones of up to $31.5M plus other sales royalties. Furthermore, the agreement established a joint steering committee to ensure continued research and development of the product was done collaboratively and the results of any such efforts would be shared. Shiseido is expected to launch their own clinical trial of RCH-01 imminently and will share this data with RepliCel for their own use in development and further licensing discussions pertaining to markets outside of Shiseido’s. Recently Shiseido announced they’ve already opened their constructed manufacturing facility to support clinical testing starting later this year.

The implications behind this partnership are huge. For one, Japan has taken initiative to be the global leader in regenerative cell therapies. In 2013 they revised the Pharmaceutical Affairs Law which allows regenerative medicines to be marketed before full authorization by the government. Data from the first consumers will be collected and used in the full market authorization approval. 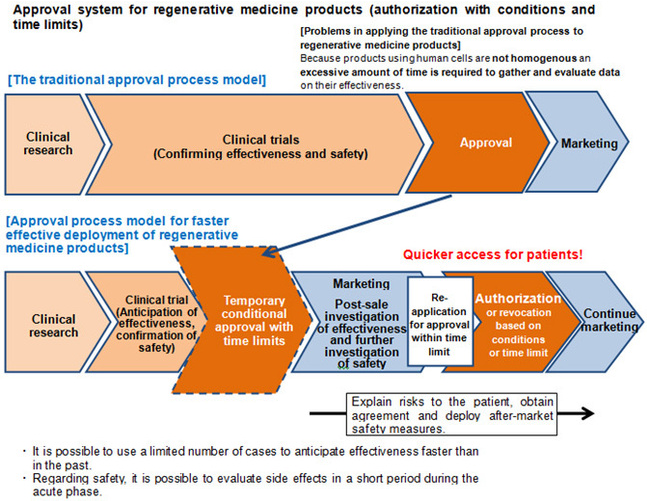 For RepliCel this means: 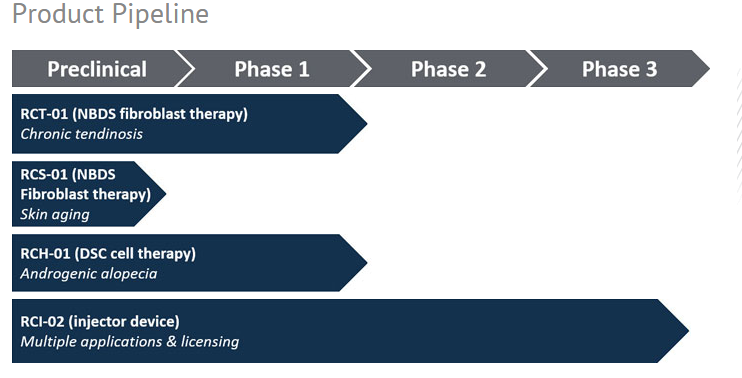 RepliCel’s Phase I trial of RCT-01 for treatment of pattern baldness resulted in firmly establishing the product’s safety. The study designed for safety, met its endpoint with no reported adverse side effects aside from a temporary, mild burning sensation at the injection site reported by some patients.

Efficacy was only measured up to the six-month point even though efficacy doesn’t typically peak until the 12-month post-treatment for other products or treatments. At six months, 63% of the “responders” (patients achieving over 5% density increase) experienced an average density increase of 11.8%. 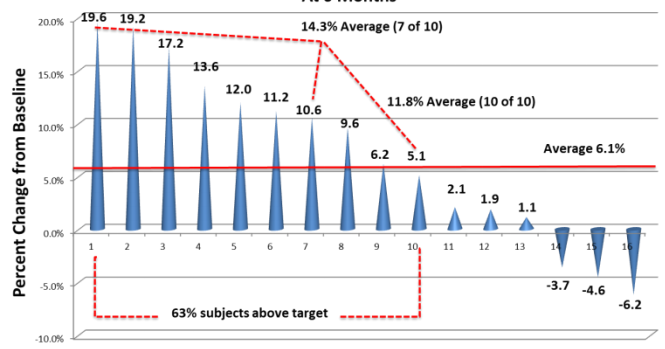 Figure 3. RCH-01 Phase I results at the six-month mark.

The gold standard for hair loss treatment is micro-transplant surgery, which is a costly and extremely time consuming treatment. This would be for patients that are looking for dramatic change and have the means to do so. Rogaine is a topical solution available for men and women that increase hair density by 8%-16% at the 12-month mark, which needs to constantly reapplied. Propecia is an oral pill, for men only, that increases hair density by 7%-14% at the 12-month mark, which again needs to constantly be reapplied.

While the results were varied, a single injection of RCH-01 saw results, at the six-month mark, of up to 19.6% increase in hair density in a sample size of 16 people. Overall these are very impressive results and it was this data package that compelled Shiseido to seek out a deal for the technology. RepliCel’s pending Phase II trial of RCH-01 will study single vs. double injections and also investigate different doses.

RCH-01 fits into the market between surgery and drugs offering potentially stronger results through the means of a less invasive clinical treatment. This would be between the micro-transplant surgy which is expensive, and the drugs Propecia and Rogaine, which carry the risk of side effects and must be consistently reapplied for effectiveness.

Things to look for in the Phase two trials will be the percent change from baseline and the effectiveness of increased dosage and/or multiple injections). Even in the event that RCH-01 does not show a significant increase in both effectiveness and responders, RCH-01 can position itself in two ways for consumers; if the number of responders is increased, this can be potentially used as a combination treatment with hair regenerative drugs. Secondly, if the percent change from baseline shows a dramatic increase in a limited set of responders, it would be worth a clinical visit even if response percentages are low. In such case, it may justify doing a subset analysis or other preclinical work to identify patient biomarkers capable of predicting responders.

A study by Dr. David Connell showed significant changes in pain and function scores in patients with Achilles tendinosis through the introduction of dermal fibroblast cells. It has been shown that these cells are not as strong as fibroblast cells from the dermal sheath (RepliCel’s technology) at synthesizing Type I collagen. As a result, Connell licensed his intellectual property, data, and technology to RepliCel and joined as an advisor.

RepliCel’s anticipate Phase I/II study, titled “A randomized, double-blind, multi-centre dose-finding study to evaluate the efficacy and safety of RCT-01 in men and women with unilateral, chronic Achilles tendinosis,” addresses the inherent deficit of active fibroblasts required to regenerate healthy functioning tendon after injury. The trial, to be conducted at the University of British Columbia (Canada), will measure several safety and efficacy endpoints following a single injection of RCT-01. The study will be performed over 12 months costing under $1M and will initiate later this year. Six-month efficacy data is expected in second half of 2015.

Chronic Achilles tendinosis is a degenerative disease of the tendon caused by a cycle of injury, improper healing and re-injury resulting in ongoing pain and loss of function. Healthy functioning tendon is comprised of highly structured Type 1 collagen which resident fibroblasts play a significant role in producing and maintaining. RCT-01 is a fibroblast platform using cells derived from the patient’s hair follicle. These particular fibroblasts are highly expressive of Type 1 collagen, which is needed to support the regeneration of tendon for patients suffering from chronic tendinosis.

A recent study published in the British Journal of Sports Medicine estimated the incidence rates of Achilles tendinopathy to be .235% of the general adult population (21-60 years). If applied to the U.S. population this would translate into approximately 750,000 people in the U.S. suffering from this chronic condition at any given time.

Younger healthy skin is typically found to have high density of Type I collagen which decreases as time progresses and UV damage sets in. In a Phase I study of healthy volunteers RepliCel’s fibroblast technology (RCS-01) will be tested for its potential to reverse this and treat the appearance of aged skin. The primary end point will be safety but biopsies will be taken at various follow-up intervals to measure (by histology and FACS analysis) the product’s effectiveness on a number of biomarkers associated with aging skin. This Phase I study will enroll 28 patients costing approximately $500,000 with data available in 2015.

The company’s cash position as of Q2 results was $4.3M in cash and equivalents. Sporting a current burn rate of $350,000/month which is expected to increase late 2014/early 2015 as clinical trials ramp up, RepliCel will likely be looking at raising cash in 2015. In addition to equity financing the company reports actively exploring funding from other potential partnerships, warrants in the money and other sources of non-dilutive funding. Current shares outstanding of 54.9M and 67.4M fully diluted may raise concerns as returns are dispersed through a large volume of shares. Ownership is 43.5% by founders, officers and insiders, which indicate belief in the product that can be developed and licensed out.

With all micro-cap stocks, especially biotechs, one should be wary of the risks. The valuation of the company is currently based on its potential future returns that carry the uncertainty of being unrealized due to failed clinical trials. RepliCel currently does not generate revenue from operations and faces significant business failure risk. Due to the nature of the product, the success of RepliCel post-approval will rely on the acceptance from the medical community and general public, which may be a hurdle.

This is a company with one Phase I trial, one Phase I/II trial, one Phase II trial, and late-stage prototype development of a new injectable device for $23M market cap. On top of this, there is support from Shiseido, which is funding an additional Phase II trial that could lead to conditional market approval in Japan. That, in turn, would trigger early access to revenue streams for RepliCel. I believe RepliCel is a heavily under-researched stock that has a lot of potential to be a disruptive player in the regenerative medicine sector.

Editor’s Note: This article covers one or more stocks trading at less than $1 per share and/or with less than a $100 million market cap. Please be aware of the risks associated with these stocks.