“We continue to make solid progress on our development plans for RCT-01 for treating chronic tendinosis and RCH-01 for treating pattern baldness and expect to have our Phase 2 clinical trials for both programs underway during the first half of 2014,” stated David Hall, CEO of RepliCel. “The third quarter brought incremental funding and validation of our platform with the establishment of a collaboration and technology transfer agreement with Shiseido covering our potential baldness product, RCH-01, on an exclusive basis in Japan and additional Asian countries.”

Research and Development Update
RCT-01: RepliCel is currently finalizing its standard operating procedures (SOPs,) for the manufacturing of cells for its Phase 2 clinical trial for the treatment of chronic Achilles tendinosis which the company plans to conduct in Canada. The preliminary clinical trial design has been completed, and negotiations are underway for the contract manufacturing of the cells required for the study. Upon the finalization of the manufacturing SOPs, the company will initiate its pre-clinical trial application meeting with Health Canada to discuss the trial design and manufacturing protocols and make any necessary changes before filing the final Clinical Trial Application planned for the first half of 2014.

RCH-01: The company has completed its Phase 2 pre-filing meetings with the German Competent Authority responsible for the authorization of cellular therapies (the Paul Ehrlich Institute) and is in the process of completing cell stability studies required for the Investigational Medical Product Dossier. Submission is planned for early 2014 with the initiation of the trial anticipated in the first half of 2014. The company is also in the final stages of RCH-01 technology transfer to its licensed partner, Shiseido, for Japan, China and the ASEAN countries. Shiseido is developing its own program for RCH-01 in Japan. Any new improvements made to the technology by either party will be shared. In addition, the government of Japan has announced its intention to accelerate cell-based therapies through a revised regulatory process which is expected to be made public in January 2014. The new process should facilitate the initiation of Shiseido’s clinical program and, as a result, RepliCel expects to have two concurrent RCH-01 human clinical trials which will significantly increase the available human clinical data on RCH-01.

RCI-02: RepliCel has designed and is developing a new cell injector device to be used in conjunction with the RCH-01 treatment. The company believes that the device will also have applications in certain other dermatological procedures requiring injections of specific volumes of material at specific depths. In addition to the programmable variables of volume and depth, the device will have interchangeable heads for different injection procedures (single and multi-needle) as well as a built-in cooling capability to remove the requirement for an anesthetic during an injection process. Development is expected to be completed in the second half of 2014.

Revenue for the third quarter and nine months ended September 30, 2013, was $4,120,400, attributed to completion of a Collaboration and Technology Development Transfer Agreement with Shiseido Company, Limited.

General and administrative (G&A) expenses totaled $585,021 for the third quarter of 2013 compared to $644,534 for the third quarter of 2012. For the nine months ended September 30, 2013 G&A expense was $1,788,507 compared to $2,791,555 in the comparable period during 2012. The decrease is primarily attributable to a decline in marketing and investor relations activities, and a reduction in stock based compensation which resulted from the forfeiture of options held by certain employees and consultants during the quarter.

RepliCel exited the third quarter of 2013 with $3.2 million of cash and cash equivalents. This compares to cash and cash equivalents of $0.4 million on December 31, 2012 and $74,745 on June 30, 2013. The company anticipates that its minimum operating expenses for the next 12 months will be approximately $2.2 million. Furthermore, the company believes that its current working capital and financial resources are sufficient to sustain its minimum operations for the next 18 months. 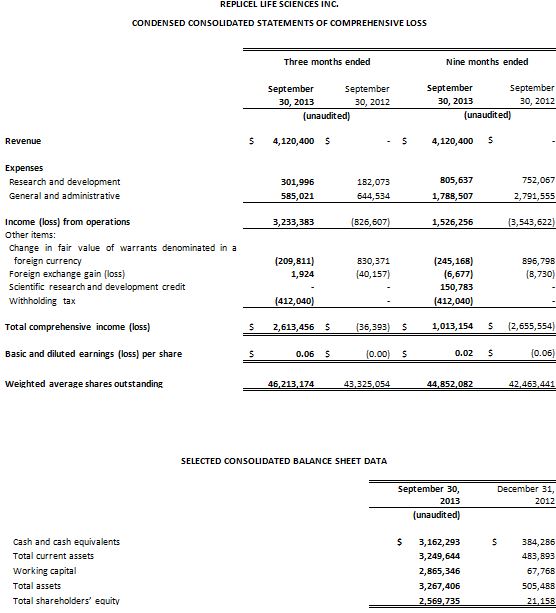