“2013 was a significant year of technology growth for the company,” said David Hall, CEO of RepliCel. “We expanded our pipeline to include a fibroblast platform based on our core competency around hair follicle mesenchymal cells. This includes a phase 2 trial for chronic tendinosis and a phase 1 trial for aging and sun damaged skin. In addition to the development of these autologous cell therapies, RepliCel has also developed a second generation dermal injector device to support its RCH-01 and RCS-01 products.”

Gemma Fetterley, VP Finance commented, “During 2013 we were very pleased to complete our company’s first non-dilutive geographic commercial license on our RCH-01 hair loss technology with Shiseido Company, Limited in the amount of $34 million including a $4.1 million upfront payment. The Company plans to seek out new geographic licensing opportunities on RCH-01 and our other technologies as we advance into and through the clinical regulatory process. RepliCel exited 2013 with $2.0 million in cash to support on-going research and development.”

Research and Development expenses totaled $1,561,963 for the year ended December 31, 2013 compared to $1,065,075 for the year ended December 31, 2012. The increase was the result of advancing the pre-clinical work for RCT-01, development of the RCI-02 injector device prototype, improvements in the cell replication process for RCH-01 in preparation for our submission to regulatory authorities and incremental expenditure on intellectual property.

General and administrative expenses totalled $2,175,209 for the year ended December 31, 2013 compared to $3,408,894 for the year ended December 31, 2012. The decrease is primarily attributable to a decline in marketing and investor relations activities, and a reduction in stock based compensation which resulted from the forfeiture of options held by certain employees and consultants during the year. 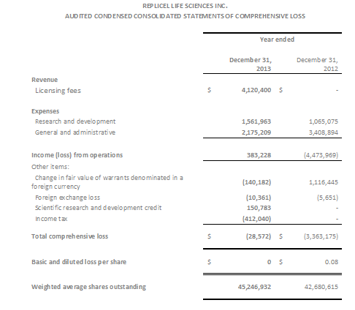