Eden Rahim of Toronto-based Next Edge Capital has had his share of multibagger and grand-slam successes, and is one of the few mutual fund managers who feels comfortable investing in micro-cap biotech names side-by-side with billion-dollar biotech stocks. In this interview with The Life Sciences Report, Rahim describes a group of micro-, small- and mid-cap biotech names possessing powerful growth drivers that could perform even when the overall market is not so hot. 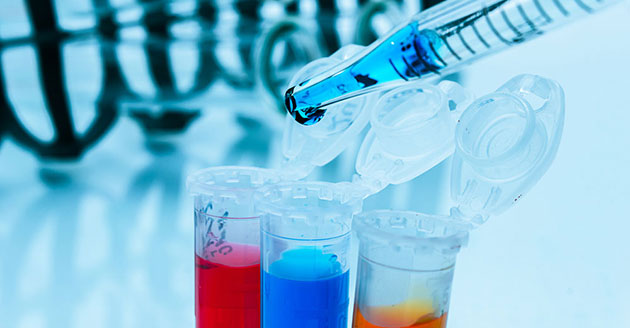 The Life Sciences Report: After China’s shares began selling off in early January, investors all over the globe began dumping shares of everything, especially healthcare and biotech. You have managed biotech portfolios since 1994, and you put on hedges so your downside is limited. How did you do during the downturn? Did it take you by surprise?

Eden Rahim: Admittedly, I did not see the intensity of the selling that began in January, compared to when stocks began to slide last August. I was nervous at that time and wrote options against 11 of the fund’s largest holdings. I also had a few hundred IBB (iShares Nasdaq Biotechnology Fund [IBB:NASDAQ]) and XLV (Health Care SPDR (ETF) [XLV:NYSE.Arca]) puts on the portfolio. When the market took that first leg down of 30%, the portfolio weathered the storm really well.

Traditionally, January and February have been a favorable season for biotech, so coming into this year I had small hedges in place, and my cash was only around 10% versus close to 20% back in August. This downturn really came as a surprise.

TLSR: What precipitated the selloff?

ER: It started when the U.S. Federal Reserve raised interest rates a quarter of a percent in mid-December. Rates were near zero, and that was the first hike in nine years. Personally, I would have thought that hike was fully priced into the market, but strangely, the market acted as if it was a complete surprise. Market breadth began to weaken.

Part of the market reaction might have been due to the rhetoric that this was going to be the first of many hikes. When that talk began, we saw the risk-off trade really come to fruition, so that any emerging market—any high-yield debt, any high-beta asset, even housing stocks—came under intense pressure. This included biotech. Biotech, having the longest duration of all asset classes, suffered the brunt of it.

TLSR: How do individual investors maneuver in these situations?

ER: Individual investors are as empowered as I am to hedge their portfolios. In the fund, we use options on the XLV and on the IBB. Investors can use these for protection in their own portfolios. For biotech, you can also sell (write) options against your positions. You can write one-month, out-of-the-money options, and once they go far out of the money, you can cover and rewrite another month. The individual investor is as empowered as a portfolio manager to do these things.

TLSR: Are you ever long the IBB ETF, or do you just use its options?

ER: The fund can be long the index, but generally is not because the portfolio is comprised of fairly high-beta stocks in the mid-cap area, where the fund is focused. If you look at the weighted volatility of the individual portfolio positions, they are roughly 70%, versus ~35% for the IBB. But the portfolio volatility is still less than the IBB’s because of the use of options to mitigate some of that unpredictability. That’s the advantage.

The fund generally uses the IBB options as a counter to the existing portfolio direction because, given the beta of the stocks held—primarily Phase 3 companies—in a market rally such as I think we might embark upon soon, they will have a beta of two or three times the IBB. I’m comfortable being there. Generally, the IBB is a hedge, but as your question implies, it doesn’t have to be. Never say never.

TLSR: You perform meticulous fundamental analysis on biotech stocks, but you are also an elf, as Louis Rukeyser used to call his technical analyst guests on Wall Street Week. I want you to put on your elf’s hat for a moment. You sent out an e-mail on Feb. 10 that included a chart showing the IBB index over a 15-year period. You highlighted the huge biotech rallies following periods when only 0–4% of biotech stocks in the IBB were above their 50-day moving averages. What percentage of biotech stocks in the IBB are above their 50-day moving averages today, and what does that bode for the future?

ER: Technical analysis is an important tool for biotech because of the extent to which shares and biotech indices oscillate between feast and famine. I look at a number of indicators.

Biotech has achieved a very rare oversold level, by many measures. Looking at one of those indicators, such as the 150 stocks in the NASDAQ Biotech Index, only 3% of those stocks were above their 50-day moving average when I sent out that e-mail. That’s the second lowest reading going back to 2001. It hit zero at the very bottom during the crash in 2008, but then again, every market class hit zero at that point. Now, ~6% of stocks in the IBB are above their 50-day moving average, and that’s probably going to go much higher because we are dealing with an elastic band that is stretched at the moment.

But there are other measures as well. The percentage of those same stocks above the 200-day moving average has dropped below 10% to the lowest reading in 14 years, at the bottom of the two-year bear market in 2002. A similar reading in 2008 occurred after the stock market was down more than 50%; the conditions were pretty extreme at that time. That’s the magnitude of extreme oversold readings you are seeing with biotech stocks right now.

TLSR: Having ~6% of stocks in the IBB above the 50-day moving average is a bullish signal from your point of view?

ER: Right. That elastic band could really snap hard off this low. Sometimes, when the market is selling a sector with impunity, you’re not sure where it ends, but usually it ends when you start to see off-the-chart readings like this, because they only happen once every six or seven years.

Furthermore, the NASDAQ biotech index has corrected back to its 200-week moving average for the first time since the bull market began in 2011. It has served as a good starting point for new bull markets four out of the past five times since 2002. 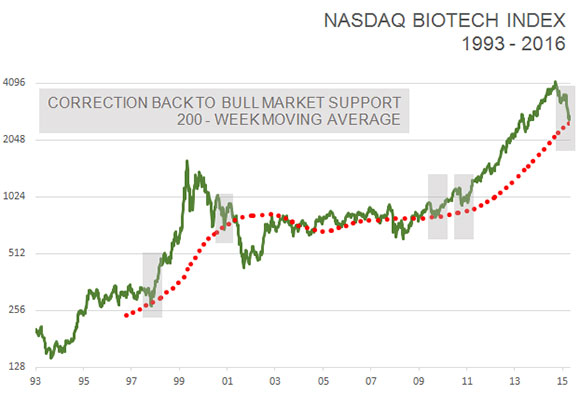 TLSR: Even the worst markets come back eventually. But small-cap biotech investors worry that this kind of weakness will impede the progress of the companies they own. It gets harder to raise capital, new funding comes with less favorable terms, and initial public offerings (IPOs) are nearly unheard of in this kind of market. Even with a market snap-back, is this going to have a damaging effect on very small companies?

ER: After periods like this, small companies remain in the wilderness for some time. That is because you can buy Phase 3 companies pretty cheaply that have already passed key data point barriers, or that are close to commercialization, and hold large cash balances. But there are exceptions. One small company I like has been very resourceful, and has managed to achieve a lot with limited financial reserves. That is a testament to management.

TLSR: Go ahead and talk about that company.

ER: My focus tends to be on larger mid-cap, late-stage development companies, but I do like RepliCel Life Sciences Inc. (RP:TSX.V; REPCF:OTCQB), a micro-cap, Canadian, regenerative medicine company with a novel technology developing autologous cell therapies. What’s interesting about RepliCel is that it has four novel programs on the go, and management has secured a partnership with Shiseido Company Ltd. (4911:TYO) in Japan to fund its alopecia trials.

|“Individual investors are as empowered as the portfolio manager is to hedge their portfolios.”

RCH-01 for pattern baldness could be on the market in 2018. The company has developed a dermal injector device, RCI-02, to pair with its therapeutic approach. It will file for CE mark approval of the dermal injector in the European Union (EU) later this year, and I think the product will be on the market in Europe in 2017. Management has been able to derisk this little company in a way many small companies haven’t been able to do.

TLSR: Tell me a little about the dermal injector, RCI-02.

ER: It’s a novel instrument with extreme precision that sources the cells in the scalp. It has an analgesic delivery capability built in so it can simultaneously anesthetize the skin and obtain autologous dermal sheath cells. It will have many applications. It will be on the market in Europe first, and then in the U.S. RepliCel won’t market the product itself, but will partner that out. The company could have the alopecia therapy on the market in Japan in 2018, and the dermal injector could be on the market in the EU in 2017.

TLSR: What should investors anticipate as a share-moving catalyst for RepliCel?

ER: The device is a catalyst. Even though RepliCel will have data in the alopecia and tendon repair indications, later this year I think the dermal injector may carry more weight because the market may realize it represents the fastest route to commercialization and revenues, which would help the company mitigate some of its cash burn. The adoption and costs to market the device are much less than they would be for developing and commercializing a therapeutic.