A cure for baldness? Stem cell researchers race to regenerate follicles from hair resistant to loss 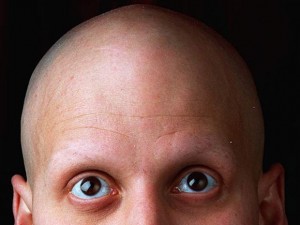 The cure for baldness? It could be closer than you think — i.e. among the baldness-proof follicles that usually reside at the bottom back of the head, stem cell researchers claim.

The cure for baldness? It could be closer than you think — i.e. among the baldness-proof follicles that usually reside at the bottom back of the head, stem cell researchers claim.

A cure for baldness doesn’t leap to mind when one ponders the next advance in stem-cell research, but whoever manages to do it could become very rich.

Scientists have already grown liver and brain cells in the laboratory using cell samples from humans. Others are trying to find a way to nurture new hair growth on shiny heads.

A new analysis of existing studies linking hair loss and cardiac health suggests men who experience premature balding before the age of 50 may have an increased risk of developing heart disease.

In the meta-analysis (a critical examination of previous observational studies), conducted at the University of Tokyo, researchers analyzed data from six previous studies that investigated the link between male hair loss, congenital traits and cardiovascular disease. All together, the studies tracked the hair patterns of over 40,000 men ranging from middle age to those over age 60.

Hair transplants are still the “gold standard” for hair restoration, Hall says, but their success relies on the skill of the surgeon and a supply of healthy follicles from elsewhere on the scalp.

The RepliCel technique was pioneered by company co-founders Rolf Hoffmann, a German dermatologist, and Vancouver researcher Kevin McElwee. Hair follicles are harvested from the back of a person’s scalp, where hair is typically resistant to the hormone that causes baldness. That tissue is transferred to the lab, where researchers isolate dermal sheath cup cells from the base of the follicle. Those cells are replicated by the millions over a period of three months, later to be injected into bald areas at the top of the scalp.

“What initially attracted me to this concept is it’s not a drug,” says Hall. “The treatment uses the patient’s own cells to replace hormone-compromised hair-follicle cells in the bald areas. The concept of treating cellular deficits with your own cells is elegant.”

The company hopes to have a clinical trial with 120 men in Germany in the coming months as it works its way through regulatory requirements that could lead to licensing in Europe, the U.S. and Japan. It has already completed an initial trial of 19 subjects that found no serious adverse reactions six months after injections.

But RepliCel’s plan isn’t to bring its cell cloning all the way to market, Hall says. Rather, it wants to prove the effectiveness of the technology in the hopes it will be purchased by another company.

Companies are chasing the estimated $3 billion annually spent on hair-restoration treatments worldwide.The market could be even larger if women — who are turning to hair-replacement surgery in greater numbers — also buy into newer procedures.

‘You feel bad because you’re losing your hair. Then you feel guilty for feeling bad because it’s only hair. So the psychological hit isn’t just once, it’s twice’

“For women, when you’re starting to lose your hair — no matter what age you are — it really packs an emotional wallop. You can feel less attractive, you can feel less sexy. It turns out a lot of our identity is tied up in our hair,” she said. “It’s how we present ourselves to the outside world.”

Androgenetic alopecia is the medical name for male pattern baldness (thinning hair and eventual baldness starting at the temples, moving to the crown and top of the head) and female-pattern baldness (general thinning.) They’re both caused by a combination of genetic predisposition and hormonal changes that are not particularly well understood in women. Once hair loss starts, says Janus, both women and men are launched on a conflicted emotional journey.

“There’s a real dichotomy. You feel bad because you’re losing your hair, losing who you were. Then you feel guilty for feeling bad because it’s only hair. So the psychological hit isn’t just once, it’s twice. Society tells you you shouldn’t care, but you know you look weird.

Another reason for a jaundiced view of the search for a cure to baldness is that it’s been dominated by snake-oil salesmen for decades. These schemes have played on the emotions of people worried about losing their sex appeal or even their edge in the professional world.

Janus says anyone who can make an effective product will find a world of grateful buyers.

“If they’re selling stuff that really doesn’t work, then I think they’re taking advantage,” she says. “If they actually have a product that works very well, like Rogaine or implants or wigs. … If they’re selling something that is going to give a person — male or female — that sense of self back, then they provide a service. And it’s a good thing.”

‘How do you get the public to understand that this is really backed by science’?

Jeff Donovan, a Toronto dermatologist specializing in hair transplants, agrees the hair-restoration industry has a dismal reputation because it’s short on hard research and long on hard sells.

“It makes it a lot more difficult for people doing good work to get their data seen,” he says. “How do you get the public to understand that this is really backed by science — which is what is so desperately needed — vs. someone who just brings a product to market and licenses it under nutritional supplements, let’s say, and with strong marketing the public can be convinced that both of those are equally promising.”

Donovan advises consumers to wait for clinical evidence before buying into anything.

And like the U.S. Food and Drug Administration-approved treatments already on the market — such as minoxidil cream and finasteride pills — anything new will probably work to some extent on some people, he predicts. Donovan has heard RepliCel’s Hoffman present early findings at a European dermatology conference and says he’s intrigued by the possibility that it could one day be added to the mix.

“These treatments don’t work in everyone and don’t work in advanced hair loss. Minoxidil works differently than Propecia; one’s a topical treatment and one’s a pill, and the two combined work even better. So here we have a third treatment (RepliCel’s) that works even differently. It’s going to be exciting to see if it does anything and, if it does, even a little bit, then it can be combined with minoxidil as a treatment. Because anything you can do to help hair is going to be good.”